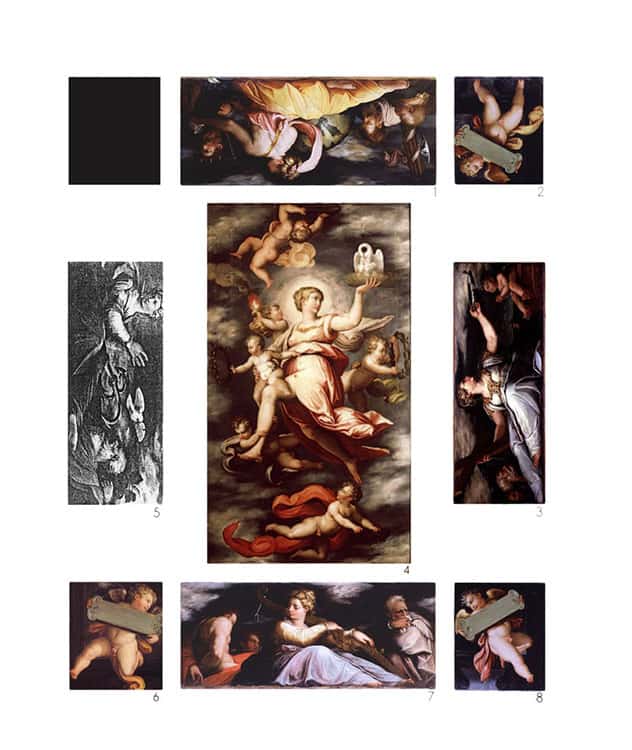 The Palazzo Ca’ Corner Spinelli was edified on the Canal Grande for the Lando family by architect Mauro Codussi at the end of the 15th century. The palazzo was bought later on by Giovanni Corner, who commissioned important structural changes to architect Michele Sanmicheli and the decorative part to Giorgio Vasari. The latter executed a ceiling composed of nine compartments for one of the halls of the Palazzo which, at the beginning of the 19th century, was dismembered, and the single compartments were sold on the European antique market dispersing themselves. Following Vasari’s description, Jürgen Schulz began the reconstruction of the ceiling in 1961 tracing back six out of the nine boards; Patience, Justice, and two Putti in the Capua collection in Rome; Faith and Hope in other private European collections.  From 1987, the venetian superintendency managed, via acquisitions and deposits, and with private and public financial support, to secure seven of the nine boards. In 2013 Venetian Heritage supported the fundraising for the acquisition of the panel representing Faith, while in 2016, Oscar winner James Ivory – American director and an honorary member of the Foundation – started a fundraiser through which the purchase of the last board depicting Hope was made possible. Venetian Heritage funded the restoration of the wooden ceiling boards of the vasarian panels, the intervention included the juxtaposition of the compartments and, where necessary, the creation of new wooden frames. Lastly, the tables were repainted to eliminate any type of chromatic unevenness.  The original wooden ceiling will soon be exhibited at the Gallerie dell’Accademia in Venezia.