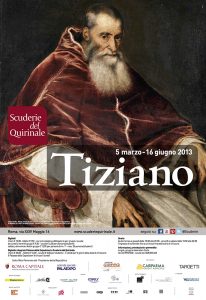 The Interrupted Concert and La Bella of Palazzo Pitti, the Flora of the Uffizi, the Gozzi Altarpiece of Ancona, the Danaë of Capodimonte, Charles V with dog and the Self-portrait at the Prado or The Punishment of Marsyas of Kromeriz are just a few of the best known works by Titian (Pieve di Cadore 1485 – Venice 1576) which were exhibited in Rome at the Scuderie del Quirinale.
An exhibition designed to conclude ideally the wider project of reinterpretation of Venetian painting and reflection on the pivotal role it has had in the renewal of Italian and European culture. A path that has been developed here by analyzing the work of the protagonists of the modern pictorial revolution – from Antonello da Messina to Giovanni Bellini, Lorenzo Lotto to Tintoretto – including Titian as final and highest proof of a European artist par excellence. The exhibition traces the salient features of the unstoppable rise of the great artist: from the Venetian beginnings within Giovanni Bellini’s and Giorgione’s workshops to the autonomy gained from his large canvases for the doges, to the Este and the Della Rovere commissions to the imperial patronage of Charles V and later his son Philip II. Decade by decade, the entire career of Titian was represented at the highest level by emphasizing the masterful sense of colour and the evolution of a brushstroke able to go beyond the limits of the idealistic and picturesque.
Through iconographic comparisons – among many, emblematic, between the Crucifixion of the Ancona Dominican church, the Crucifix of the monastery of El Escorial, and the fragment of the Crucifixion now in the Pinacoteca Nazionale di Bologna – the public was able to perceive directly the new setting and the compositional language of the master, in a careful retelling which shows not only the fundamental dimension of the religious painter, but also the complex activity of portraitist to the nobility of the time. An exhibition created – thanks to the support and loans from the top Italian and foreign museums and institutes conserving Titian’s works – to bring to the public the exceptional nature of a Titian able to grant “the greatness and terribilità of Michelangelo, the pleasantness and loveliness of Raphael, and the colouring typical of Nature”, according to the image of the contemporary polygraph Ludovico Dolce, his great admirer. The results of the wide campaign of scientific analysis, which affected much of the artist’s production, accompanied the exhibition. Completed by the Centro di Ateneo di Arti Visive dell’Università degli Studi di Bergamo, the campaign has provided outstanding results which help determine the relationship between autograph works and workshop works, and to fully document the technical evolution of Titian, starting from his formative years. The scientific catalogue is published by Silvana Editoriale with contributions from some of the most recognized scholars of the great Venetian master.