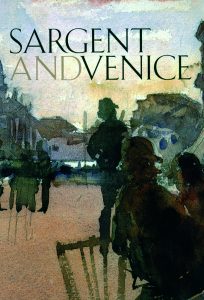 Sargent and Venice, a spectacular artist’s view of the fabled city, was shown in an exhibition that opened in January 2007 at Adelson Galleries in New York city. John Singer Sargent (1856-1925), one of a few truly international artists of the 19th century, had a love affair with Venice: he traveled there numerous times over his life. Adelson Galleries in New York, noted for its expertise in American art and the work of John Singer Sargent in particular, has organized an exceptional loan exhibition on Sargent’s work, comprising of approximately 60 oils and watercolours painted by the artist from the 1880s until 1913. The exhibition was on view at the gallery from January 19 through March 3, 2007 and then travelled to the Museo Correr in Venice—marking the artist’s first-ever solo exhibition in that city—from March 24 through July 22, 2007. A majority of the paintings shown were on loan from private collections and had rarely been on public view; several institutions, including the Brooklyn Museum, Philadelphia Museum of Art, The National Gallery of Art in Washington, D.C., the Royal Academy of Arts in London, and the Museum Thyssen-Bornemisza in Madrid, have generously loaned works as well. Inspired by the idea of retracing Sargent’s routes down the Venetian waterways, Warren Adelson, president of Adelson Galleries and the donor of the Sargent catalogue raisonné, saw this approach as a means to gather together the Venice pictures that appear throughout several volumes of John Singer Sargent: The Complete Paintings (Yale University Press). It was the first such exhibition in New York and, remarkably, the venue at the Museo Correr in St. Mark’s Square in Venice was the first exhibition of Sargent ever held in that magical place. John Singer Sargent was born in Florence to American parents and lived most of his life in England. Widely recognized as the preeminent portrait painter of his generation, he felt equally at home in Europe and the United States where he painted many of the most notable social and political figures of his day. The proceeds from this exhibition were used to benefit the restoration projects of Venetian Heritage.