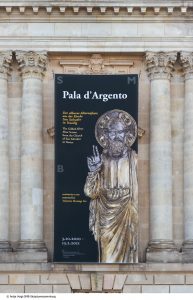 Thanks to the willingness of the parish of San Salvador, the Office for the Promotion of Cultural Heritage of the Patriarchal Curia of Venice and the Special Superintendence for the historical, artistic and ethno-enthropological heritage of Venice, the Silver Altarpiece was visited by well over 100,000 visitors from 3 October 2010 until 13 February 2011 at the Bode Museum, on the Island of Museums in Berlin. At the Bode, the altarpiece was on display in one of the early Renaissance galleries in the Sculpture Collection. Venetian Heritage, which funded the brilliant restoration carried out by Cristina Passeri, organised together with the Italian Embassy in Berlin the exhibition opening, which was supported by the Italian Institute of Culture, by the city of Berlin, and by the company Arteria-Sattis. Moreover, Venetian Heritage sponsored the restoration of the bust of Pietro Zeno, a work by Alessandro Vittoria and a masterpiece of the Berlin Sculpture Collection, which had been kept in storage since the Second World War and now has been put back on display. The Bode Museum, once the Kaiser Friedrich Museum, was opened to the public in October 2006. Its interior and exterior spaces have been extensively renovated over the past seven years, fully restoring the beauty and dignity of this extraordinary testimony to the German museum heritage. The Byzantine art and collections of sculpture and the numismatic cabinet are exhibited in 64 rooms, of different extension. The single sculpture collection includes works ranging approximately from the year 250 to 1800, thus from late antiquity to Classicism. The exhibits come from Turkey, Greece, Italy, Spain, Germany, France, the Netherlands and England. The two great cultures of the Middle Ages – Byzantium and western Europe – have been juxtaposed. The late antique works of the Byzantine section create a link with the archaeological heritage which will be put on display at the Altes Museum, the Neues Museum and the Pergamon for the first time in their entirety. Visitors can already – and even more will in the near future – come into contact with the pan-European sculpture, from Romanesque, Gothic, Renaissance to the Baroque, up to Neoclassical. The museum paths, in these areas, were divided according to the origin, from northern to southern Europe.
The interior of the museum is made up of large rooms and living spaces, characterized by themes related to specific periods, which evoke the original atmosphere from the ceiling, the portals, windows and doors, fireplaces, the sources, the shields and date from the Italian Renaissance.