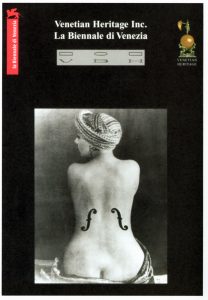 The collection of A.S.A.C. (Archivio Storico delle Arti Contemporanee, historical archives of contemporary arts) of “La Biennale di Venezia” testifies to the history of more than a century of art, from the first Biennale of Visual Arts of 1895, to the present. Its holdings make reference to cinema, music, dance, theatre, and architecture. For example A.S.A.C. owns a deposit of more than 700,000 photographs which – such as old films, music scores (amongst which there are some originals of Igor Stravinsky), drawings, correspondence, etc. – are in need of restoration, cataloguing and digitalization, so as to be accessible in the future to the many interested scholars and experts. To promote interest in – and aid in the conservation of – this immense patrimony, Venetian Heritage has organized important international exhibitions and events. Man Ray was born in 1890 in Philadelphia where he was trained, then moved to New York. In 1913 he exhibited at the famous Armory Show, forming lifetime friendships with many artists, in particular Alfred Stieglitz, the great photographer, and Marcel Duchamp. The experimental technique of his painting led him to become the leader of American Dadaism, anticipating European Surrealism. He moved to Paris in 1921 and became a photographer, which stimulated him to further experimentation, eventually leading him to Rayograph: black and white images imprinted on photographic paper without the use of the camera. Between 1923 and 1929 he turned to the cinema, creating surrealist films, while he continued his surrealist paintings. He lived in Hollywood from 1940 to 1950 creating important paintings and working in films. He returned to Paris in 1951 and remained there until his death in 1976. The Biennale di Venezia was host to his work in 1968, 1970, 1978, 1984, 1986, 1990 and 1993. He received the Biennale Gold Medal for photography in 1968. This exhibition was first organized in 1976 by the Visual Arts and Architecture department of La Biennale di Venezia and is made up of 160 black and white photographs (donated by the artist to the Archives of La Biennale di Venezia, A.S.A.C.) which document the artist’s activity from his debut as a photographer in 1917 to the end of his career. It forms an assemblage, realized with the strict collaboration of the artist himself, who – although already seriously ill and unable to travel – was so enthusiastic about the initiative that he personally re-printed all the images using various techniques: prints from original negatives, photographic reproduction from books, catalogues and publications on himself, or made by himself. The exhibition thoroughly explores the diverse functions of photography through their use by Man Ray.
The exhibition was held at the VBH Gallery in New York City thanks to the kind generosity of Bruce Hoeksema. It then travelled to Luxembourg where it was housed at the Espace Royal Monterey of Fortis Banque, thanks to the collaboration of H.R.H. Princess Guillaume of Luxembourg and to the generosity of the Fortis Banque.
The proceeds from this exhibition were used to benefit the restoration projects of Venetian Heritage and to restore works in the Archives of La Biennale di Venezia, A.S.A.C.