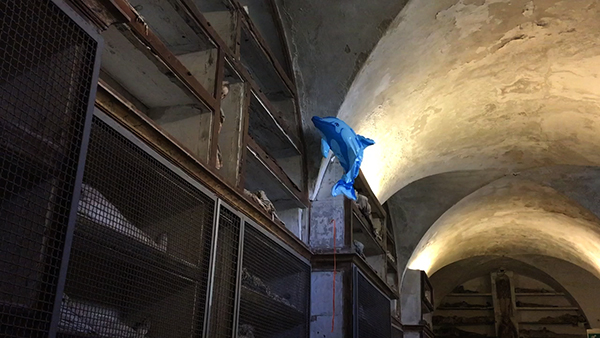 Douglas Gordon (Glasgow, 1966) is one of the most innovative and influential artists of his generation, and one of the most active in attempting to break down the barriers between art forms, particularly between the visual arts and cinema. Cinematography is a counter-reality, a parallel reality that reflects and accompanies the various phases of individual life as well as collective history. Film, as a medium and a physical and sensory reality, is a ready made medium that the artist can manipulate, decontextualize, use, or repropose in order to create a new message which is both original and parallel, familiar and unsettling. Douglas Gordon has used cinema and the medium of film as a tool which offers infinite possibilities of expression through which to analyze and question the rules of social communication, language, the perception of environmental and cultural stimuli, virtuality and the construction of memory. This use offers us an infinite range of interpretations and levels of interpretation which encourages us to look again at the apparent banality of the everyday and social conventions, by revealing and subverting the linguistic and visual clichés which underpin our existence. In his early videographic work, Gordon shows the same ease in using and reworking both old, anonymous medical or scientific material as well as films so famous they form part of the collective imagination. In one of his best-known works, 24 Hours Psycho (1993), one of the most famous films in cinema history is projected, without sound, onto a large screen at the speed of two frames per second instead of the usual twenty-four, so that the entire film takes a full day to screen. In Gordon’s version, the sequences in Hitchcock’s masterpiece reveal new and unexpected details, psychological intrigue and subconscious pitfalls that build a narrative imagery of the film from scratch, forcing us to question our supposed familiarity with the plot; time is stalled and therefore reconstructed. The extreme slowing down of the sequences reveals the coercive techniques of illusion which are often employed through modern and ubiquitous image communication systems, and which arouse in us feelings of joy or fear despite ourselves.

In Citizens of Palermo! the new work that Douglas Gordon presents in a world premiere at the prisons of the Doge’s Palace in Venice, the artist reassembles a home movie, shot by himself during a casual visit to the Capuchin Catacombs in Palermo, a huge underground cemetery which houses thousands of embalmed corpses on display to the visitors wandering its long gloomy corridors. The mummies, in upright or prone positions, are divided by social class, gender and age. Walking down the wing dedicated to children, the artist came across an abandoned inflatable dolphin, flapping freely among the children’s corpses. The macabre contrast between life and death, between the playful aspect of the balloon and the drama of the context, is summed up in a few frames, charged with pathos on the brevity of life, but also full of the grim irony of a toy which is more appropriate to an amusement park than to a cemetery, abandoned in the children’s section.

In his work, Gordon has often contrasted opposites or doubles in order to question the interpretations and clichés around good and evil, positive and negative, masculine and feminine, darkness and light, and, as exemplified by the location in which this new work will be shown, between freedom and constraint.

In the artist’s own words:

Fast forward 30 or so years and I am visiting another place of internment, at the ‘other end’ of Italy, Palermo.
I am travelling to meet a friend and I ask him if we could possibly visit the catacombs of the Cappuccini.
It was very early on a Friday morning, the site was virtually empty of people – living people, I mean.  I have to say that it is not so far in my imagination from many prisons I have visited over the years (I stress, I was visiting).  It is a wonderful and terrifying place: full of men, women and children, still clothed, very dead, but somehow still alive.
Just when I thought I was ‘used to it’, my friend and I turned a corner and were confronted by the most astonishing sight.
Something had been left behind, forgotten about and incarcerated among the dead – imprisoned for no real reason, we supposed.
The unhappy visitor floated around the dead bodies, almost urging them to rise up, fully clothed, as citizens of Palermo, ready to walk again !
Raise the Dead !