DOMUS GRIMANI The collection of classical sculptures reassembled in its original setting after four centuries The Room of the Doge valentina 2021-07-26T16:16:42+02:00 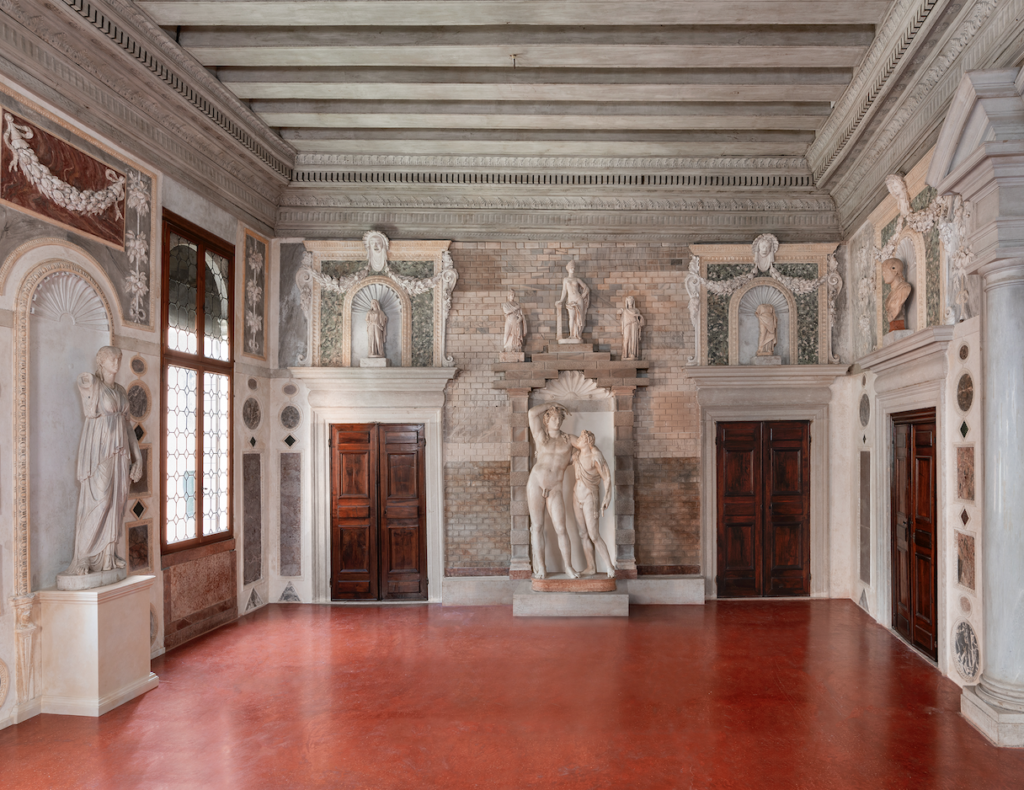 The Museum of Palazzo Grimani in Santa Maria Formosa, thanks to the collaboration between Veneto’s Regional Directorate for Museums (Direzione regionale Musei Veneto) and the Venetian Heritage Foundation, presents the new set-up of the Room of the Doge (Sala del Doge), one of the most spectacular and evocative rooms of the palace returned to its Renaissance splendour thanks to the relocation of the Greek and Roman sculptures of the Grimani collection.
The project is part of a wide strategy to enhance and promote Palazzo Grimani and its history, following the rearrangement of the Tribuna of Patriarch Giovanni Grimani with the exhibition DOMUS GRIMANI 1594-2019, opened in May 2019.
The Room of the Doge was created at the same time as the extension works of the palace completed in 1568 and commissioned by Giovanni Grimani, patriarch of Aquileia, after a first set of works realised together with his brother Vettore. This space, an ideal counterpart to the Tribuna and probably also designed by Giovanni himself, wanted to celebrate Antonio Grimani, skilled spice merchant and first doge of the family. Decorated with ancient and precious marbles such as yellow alabaster, green serpentine and red porphyry – all from the eastern Mediterranean where their grandfather acquired wealth and fame as spice merchant and military man – the room creates a spectacular setting in which to exhibit part of the classical sculptures from the family collection.
Through a thorough study of historical sources – including the inventory of Giovanni Grimani’s possessions, historical descriptions of the time and late 19th century photographs recently discovered in the library of the National Gallery in Washington – the curators Daniele Ferrara, director of Veneto’s Regional Directorate for Museums, and Toto Bergamo Rossi, director of Venetian Heritage, were able to relocate twenty sculptures inside the room, including the imperial Roman era Dionysus leaning on a satyr in the niche of the front wall. Eleven more sculptures are placed in the adjoining rooms: six in the chapel’s vestibule, one in the Camerino di Callisto and four in the Sala di Psiche.
The exhibition is accompanied by a book published by Marsilio which includes a wide range of images documenting the operation, completing the editorial research on the Museum started with the show Domus Grimani 1594-2019.
This new project — produced by Civita Tre Venezie and financed by Venetian Heritage and the Ministry of Culture, in collaboration with Gagosian, the Cologni Foundation for the Métiers d’Art, Fondazione Violetta Caprotti, Helen Frankenthaler Foundation, Michelangelo Foundation and with the support of many donors—confirms the virtuous collaboration between public and private sector in the safeguarding and enhancement of Venice’s historical-artistic heritage. On the occasion of the set-up of the Doge’s Room it has been also possible to carry out important maintenance works of the museum, in addition to the restoration of the Room of Psyche, the creation of a new heating system and a new lighting system for the entire noble floor.