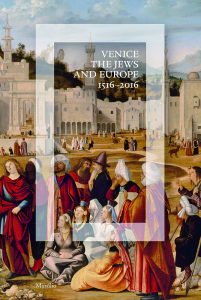 Venetian Heritage contributed to the publication of the catalogue of the exhibition dedicated to the history of the Venetian jewish community, organized on the occasion of the five hundredth anniversary of the creation of the Ghetto of Venice.

The exhibition’s catalogue “Venice, the Jews and Europe 1516-2016” tells the story of the Ghetto of Venice, the way it grew within itself, its architecture, social makeup, crafts and trades, material life, and the relations between the Jewish minority and the rest of the city, and the background of relations with other Jewish settlements in Europe and the Mediterranean. The reconstruction of the Ghetto in its different historic phases allows us follow the developments of neighborhood.
The book presents religious customs and traditions, the great importance of the Venetian printing scene – the first in Europe – the cultural, artistic and artisanal context, the use of language, the family’s structure and the economic situation. In short, the story of a complete and enthralling microcosm that grew and prospered for over four centuries within the Serenissima Republic.

The volume is available in Italian and English.